So thanks to the wonderful Amber Scott, I found a new literary blog (I'll warn you, he uses strong language, so the link is a little NSFW) Terrible Minds.  Definitely worth a read.  But luckily, I happened to stumble upon a little contest that he does, which ends tomorrow.  Well, it's about unicorns, and what kind of aspiring writer would I be to step away from a fantasy based challenge.  So below, we have my submission to this contest. 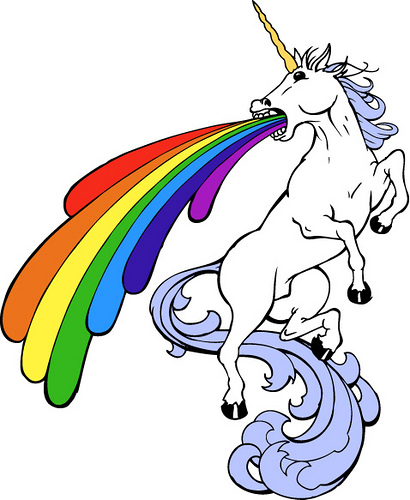 When the old farmer awoke that morning, he had very little idea that what was about to happen was going to happen. Which is sort of the point, really. If you woke up every morning knowing what was going to happen...well, you'd likely simply never leave your bed. I know I wouldn't. But this isn't about me. This is about a poor farmer who is about to really have his shit get fucked up by happenstance. Well, not happenstance, persay, more like Charles. Charles Van Packer, salesman extraordinaire (if he wasn't an imaginary character in a story, he would hand you a business card at this time. A nice one, one that would impress).
Well, Charles walked up this morning to the old farmer's house and knocked on the door. The farmer, a Matt as a point of fact, opened the door and was surprised to see not just a sales man in an impeccable suit, but also a horse. Well, he assumed it was a normal horse, though he was surprised to see a rather large horn sticking out of it's forehead. Matt raised an eyebrow in question, and Charles began his speech. Charles' selling speeches were things of legend. All the old cliches and phrases we use to indicate good salesmanship was invented by this man, after all. He was kind of like the Paul Bunyan of the traveling salesman world.
Well, the pitch went this this:
“Good day to you sir! How are you this fine, fine morning. See you have a farm here, that's delightful, salt of the earth farmers are. Now, you may be looking at me on your doorstep and thinking how fast you might be able to get your shotgun and shoot me dead, and believe me you have the right to do so, me intruding on your property and all. But before you do that, let me tell you why you must buy this marvelous, fabulous, one-of-a-kind, last in the world, bonafide, absolutely necessary Unicorn.”
Here was where the Unicorn gave an appropriate whinny of emphasis. Charles continued:
“Now you may be asking yourself, 'Charles! Why would I need a Unicorn?' That would be an excellent question to be asking at this point sir. Well, you need a Unicorn sir, because it's a Unicorn. Magical beast, all kinds of healing abilities and whatnot. Horn is very useful in defending itself and your farm from bandits and assorted other types who will attempt to hornswaggle you and yours. They have the ability to tell the truth from lies, the ability to count to ten by tapping their hooves, and also can recite poetry in several languages, all of which may or may not be dead. You may be asking yourself, 'Charles! How could I afford such a marvelous beast?' And I would say to you, 'Good question, sir!'”
At this point, the Charles smiled and with a flourish bowed and said, “I simply require five beans.” Matt looked at him, wondering why he ever moved his shotgun from next to the front door and repeated slowly, “Five beans?” Charles nodded and said, “Yes, I know I'll be taking a grievous loss on this deal, but unfortunately the going rate for magical beasts or normal beasts in a magical story was set a long time ago and not by me. But that simply means they are passing the savings on to you!”
Matt the farmer decided to take a little look at the Unicorn. I mean, after all, if a salesman shows up and says they have a marvelous, fabulous, one-of-a-kind, last in the world, bonafide, absolutely necessary Unicorn...well, it garners at least a little gander. The Unicorn did indeed look the part of a mystical beast of lore. Pure white was it's coat (though under closer examination it looked a little off-white), a opalescent horn glittered on it's forehead (to be honest it looked a little wobbly), it's eyes flashed intelligently with untold wisdom of the ages (Matt wasn't too sure what he would do with the wisdom of the ages, when he thought about it), it's cloven hooves stamped the ground and rose up billows of dust (This certainly made him pause, though he had heard that down the street a foal with cloven hooves was born), and the tail was long muscled with a small tuft of hair at the end (Unusual, but last night on the television he had seen a special on the dangers of nuclear radiation).
Matt paused and scratched his chin. His was a threadbare life and he didn't take much to such slicked up city folk. The bank had been after his farm for a while, but he always seemed to turn a profit despite setbacks. He pulled a cigarette out of the box he kept in his chest pocket and slowly lit it while continuing to appraise the animal. After taking a slow, deep drag from his cigarette, he said, “Well now sir...that is a mighty fine animal there. Mighty fine. And mayhap I do have need of a marvelous, fabulous, one-of-a-kind, last in the world, bonafide, absolutely necessary Unicorn. And mayhap I don't. But your asking for five beans is a rather disturbing notion that fills me with apprehension. I feel that there may be something of the rogue in you...or something of a disbeliever in myself. To be honest, I've heard the tales of Unicorns and I have heard it said that they are not visible to the eyes of an old sinner such as myself. They only appear as old mares to such as me, and display their true glory to young virgin girls.”
Well, Charles knew that he had been beaten. He nodded his head, exchanged a few more pleasantries and kipped off. Though while loading the Unicorn back into the trailer, it paused and said, “Don't worry Charles, I know you'll find me a good home eventually. These things take time is all.”
Posted by Sean Samonas at 6:59 AM