Tips for Infusing More Roleplaying in Your Games

So, yesterday I talked about roll-playing versus role-playing and my discontent with how modern gaming has kind of lent itself towards players sliding into simply roll-playing without much creativity.  One of the points I mentioned is of course that with older games, you had to be creative and imaginative (no lie, it even says it in the old white box rule book as a requirement) and in the newer systems you can rely more on using your dice rolls to get out of a spot.

This does not have to be the way.  Now, granted, if you are the kind of person who enjoys roll-play, I'm not saying there is anything wrong with that.  But if you are in a game that you feel lacks some sense of role-play, be you DM or player, I'm going to be offering up some tips to kind of help infuse your game with some more little bits of role-playing.  These can be put in to pretty much any game type, and can be used as much or as little as people feel comfortable using.

Alright, so first step is the easiest.  Character backgrounds.  I used to require this for all my games, until I got pretty lazy recently and haven't been asking my players to do this.  Character backgrounds can be in many different formats.  A popular one for those that don't have prolific writing skills, or simply don't have the time to come up with (or DM's who don't want to read one) an essay on your characters life before the game began.

There you go.  A good example of how to fill it out is this:

Name: Mantarok Kandrick
Class: Paladin
Race: Human
Alignment: Lawful Good
Description: Average height, blonde hair, blue eyes.  Wears heavy armor with a longsword and a mace at his belt and a shield with his god's holy symbol on the face.
Goals: Family was killed by undead.  Hates all undead and wishes to destroy them whenever he finds them.

Boom.  Done.  Hand it to your DM and read it off to the party when you first meet up (you may leave off the goal part for the rest of the party if it's supposed to be a secret).  Instantly, not only does the DM have a good feel for your character, but he also has a good story hook (if he ever needs one) with the goals section.  For Mantarok here, I may have him confront his undead family and have to destroy them all.

Now, you can also write it in story format, which I've done for the most part myself.  It can be enjoyable to come up with stories for your characters, though the main trouble I've found is trying to keep it level appropriate.  This means that your first level fighter can't have taken on an entire legion of demon foot soldiers.  Or it can, depending on how lenient your DM is.

Now, for you DM's out there, I give this advice about character backgrounds.  It is easy to just read them over real quick and just move on.  My thought is though that if people are playing DnD, in general, it tends to be because they are creative people.  Don't throw away good plot points or campaign ideas just because it wasn't yours!  Like I said, to go back to Mantarok there, there is an entire campaign full of interesting ideas concerning undead and his family.  Let the player know that the undead who killed his family were under the control of a Lich who has a dungeon nearby.  If someone writes that they hate orcs because of some reason, throw some orcs in for them to fight every once in a while to make the fight special for them.  Even if you are playing a pre-generated campaign, you can always make level appropriate adjustments to fit your characters backgrounds and goals.  Any changes that you make in that vein simply makes the world seem more alive for your players because they are becoming more and more a part of the tale.  And that is why they come back to the table every session.

Now, for you artistically inclined players, drawing a character sketch is of course one of the best ways to show the party what you look like.  This is not always easy if you are like me and can't draw at all.  Not even stick figures.  By the way, I think only two or three people who read this will get what those comics are about...but it is just an example that my art is horrible.  Or you can be like my friend Beanclam and draw ridiculously good portraits of your character.  If you are like me, you'll just go on google, type in "human wizard" and go with whatever looks best.  If you have the cash, there are actually quite a few artists online who would love to be commissioned to draw your characters for you.

So you have your character background and a picture of your character (obtained one way or another) and you are all set!  Just a little bit of effort and already you are beginning to have a more engaging and imaginative session.  What is next you may ask?  Well, there are a lot of various small things that can be used.

One of my favorites is accents.  I played a Halfling Rogue/Shadow Dancer/Assassin in one game and my big hook with him was that he was a pirate.  I always pictured him kind of looking like this: 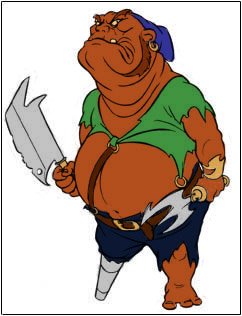 Which meant I talked with a pirate accent for the entire campaign (which is harder then it sounds...yar).  Like a more serious version of me doing the Foghorn Leghorn voice.  But even that had it's moments for role playing and character involvement.  It doesn't have to be perfect, nor does it have to be consistent.  Just throw in a little bit of an accent and again, it helps define your character and make him more real.

Another idea is to add props or accessories.  This doesn't mean you have to come fully in costume, though by no means am I saying you can't.  But if you are a wizard, and you want to wear a pointy wizard hat, go for it. 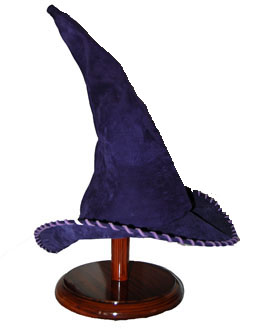 Your rogue in game always has a padlock he is playing with, bring one in and fiddle with it when the action isn't on you. 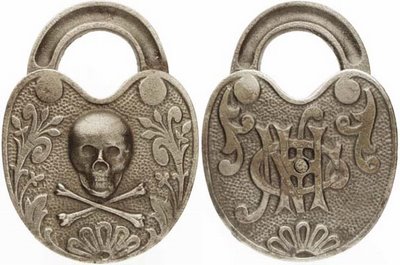 The rule of course is be creative, but be mindful of your other players.  Don't pick something that is large and bulky or loud and distracting.  Everyone deserves their time to be the focus of attention, so don't steal the spotlight when someone else is having fun!
Well, there you go.  Just a few basic tips to add to your game if you feel the need.  Good gaming everyone!
Posted by Sean Samonas at 11:42 AM