Tomb of Horrors, an Overview

Well, it is finished.  We killed the bad guy and got our treasure.  Though of course we know that it doesn't really end here, since there is "Return to the Tomb of Horrors".  Though apparently that one is only available to play in previous editions, though I heard rumor of a 4th edition version.  Which means I'll never play it since my current group hates 4th edition.  I'm a man who likes to hold out and actually play it before passing judgement.  Though I will say it's biggest detriment is of course in the fact that Wizards of the Coast has admitted that it is supposed to be a compromise between MMORPG's and table-top gaming. 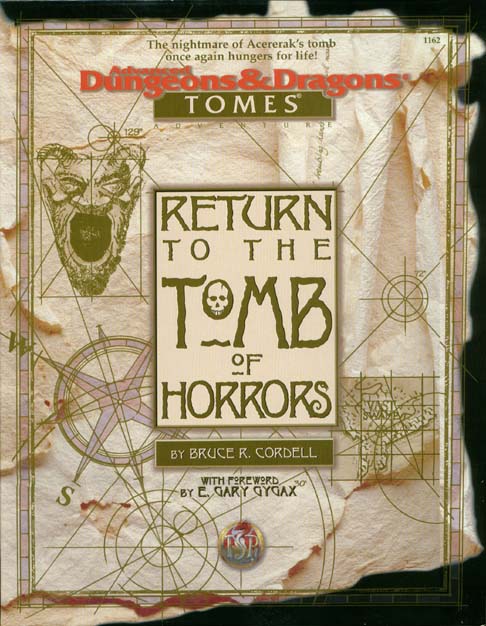 More after the break!
Still with me?  Okay.

So here is the thing.  I loved Tomb of Horrors.  It was a lot of fun to play.  And as unusual as it is for me to admit this, I find myself wanting to play more sessions like this, where it is just a pure dungeon crawl, without some sort of over-arcing storyline.  Don't get me wrong, I love over-arcing storylines.  The current homebrew game I'm working on and currently running for my table-top group is just one giant over-arcing storyline.  They've been playing it for almost, if not at least, a full year (out of game) now and still (hopefully) enjoying it.

But I've been kind of hurt by over-arcing storylines as well.  For example, in my original DnD group, we had a fantastic DM.  Mark R. (also known as JJ_Wolven over at dndonlinegames.com) not only got me into Dungeons and Dragons on a regular basis, but he also established my DMing style and my game style.  Seriously, I cannot praise the man enough for forming and nourishing my love of DnD.  The only fault I really have with him is that we never finished a single campaign the entire time I played under him.

Now, that is not really his fault, persay.  We (the players) certainly did ask to change a lot, and he was happy to oblige.  I just would have really liked to have gotten to the end of some of those stories he began for us.  Of course, some of them are still going over at dndonlinegames.com, so I may actually see an end to it.

Well, that group kind of fell apart once people started moving away to far off, exotic places (Mark moved to San Diego, one player to LA and another to Japan).  I kind of stopped playing DnD for a while until one day I got a phone call and was invited to join a group by one of the people I used to play with under Mark.  Well, I show up and before you know it, I'm playing "Forging of Light".  It is a homebrew campaign made up by one of the other Sean's in my group, Sean Hollins, and his friend, Aaron.  It was a ton of fun, and I'd really like to play it again, because...

Well, I came in at the middle, and we never finished the game.  The party was wiped out (I'll be talking more about this soon) and we just all quit.  This was around the time that 4th edition and Pathfinder was coming out and people were trying to decided if we should move to a new edition or not and if so, which one.  We choose Pathfinder after some research.

Well, I started DMing and I chose to run the "Age of Worms" campaign arc from Dungeon Magazine.  It was a lot of fun, but unfortunately, the party stalled out and were unable to actually finish the campaign.  (If you are counting, this will be about the third official campaign I started and didn't finish). So here I sit, having finished a one shot dungeon crawl successfully, and never having really finished a large scale campaign.  Other campaigns started and never finished, Rise of the Runelords.  Both as a player and a DM...oh the shame of it all.

The only long term one that I think I can claim to have finished would be a game with my halfling pirate Grennis.  It was a pretty cool three module campaign with some very heavy Cthulhu influences in it.  I can't really remember the name, but it was a lot of fun.  Though I only include it as a technicality, since I wasn't actually there for most of the last module.  I only happened to be in town for the last session, so I was able to show up and aid in the last fight.

So where is all this going?  Well, first, it was a clever way to kind of introduce you to my history in gaming.  Second, it is really heading to the fact that I have a large amount of discontent with modern gaming systems.  They really have put a large focus on Roll-playing versus Role-playing.

Now, some people would argue that it is the natural evolution of the games.  That since we have television, movies and video games showing us more and more amazing things with less and less imagination needed to visualize those things our imagination based game systems need to become less dependent on imagination and more dependent on aids to the players.

I began playing in 3rd edition.  Right after I started they changed to 3.5, which worked for me since I hadn't bought any books yet.  So I bought a bunch of the books and have been happily playing ever since.  Except I've wanted something more recently.  I want to be able to do things that unfortunately 3.5 and even Pathfinder don't have any way to do them.

Now, you may be asking yourselves what I meant by Roll-play versus Role-play.  Here is an example:

Okay.  Now here is Role-Playing:
DM: You find yourselves in a room.  There is only the door you entered by, other then that the room is featureless.
Player: Okay, I'm going to search for hidden doors.
DM: Okay, how?
(I would like to take this time to point out that right there, I would say almost all of modern gamers would just shut down and not be able to figure out what to do next.)
Player: Well, does any of the stones on the wall look different.
DM: Well, it's dark in the room, all you have is your torchlight.  It's hard to tell.
Player: Okay...well, I'll go ahead and tear off a small strip of cloth and hold it up in the room.  Do I see it move?
DM: Yes, you notice that it is fluttering towards the south wall.
Player: Okay, I search that wall for a secret door.
DM: Okay...you see a wall made up of regular stone masonry.  How will you search it?
Player: I will look at each of the bricks that make up the wall and check for any irregularity.
DM: Okay, about halfway up the wall, you see a small indentation in the brick.
Player: I press it.
DM: You see a door swing open in the wall.

Now, for me, that second exchange between player and DM is so much more satisfying.  You accomplished something much more then just rolling dice on a table.  You actually outsmarted someone who put something hidden in that room.  What is the saddest thing though is that eventually in most modern games there is no way to accomplish that.  If I pulled that on my table-top group they would have a riot because I'm not following the rules as far as searching for hidden doors go.

I can house rule some things, like making diplomacy/bluff/intimidate rolls actually depend on what you say, but it still comes down to them making a roll with me adding or subtracting modifiers depending on what they say.  If I disregard the rules altogether and just go with straight role-playing ability certainly some people would be left behind while others would excel.

It certainly tempts me to try to find the rule books for old 1st or 2nd edition DnD and try to see if I can convince others to let me run that.  Though I know quite a few people in my tabletop game would certainly not want to, which leaves me a little stranded on that idea.  I do have the old white box set though. 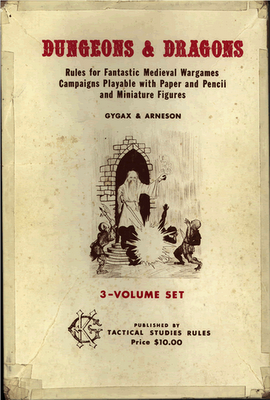 It's in horrible condition (the box) the booklets are actually in really good condition.  Anyway, again, I just feel I'd have a very hard time convincing the others to try it.  Some because it means learning a whole new system, and others because they enjoy the new system over the old.  A lot of these points I got from this wonderful essay by Matthew Finch.  It is a free download, so go give it a read.
One of the points he makes is that modern day gaming is focused on super human rather then just human.  And I could not agree more.  Seriously, I could throw up every time I hear someone say the phrase: "What?  But I rolled a 20!  How can I fail?".  One of my biggest pet peeves in gaming is when players just cannot accept that sometimes things are supposed to be hard.  They are supposed to be near impossible to handle.  But modern gaming systems kind of did away with that.
If you really know what you are doing with your character with skill focus feats and placing your skill points wisely, you can easily get really high skill rolls at early levels.  And even at higher levels, certain things have static difficulties.  Tomb of Horrors is a great example and showcase for pointing out the differences and how 3.5 version is kind of a hand-holding affair, while original Tomb of Horrors is just brutal.
One of the first things that Mark taught me was that sometimes you need to run away from a fight to survive to another day.  Modern day gamers don't have that mindset anymore.  Everything that is placed inside of a first level dungeon is designed to be handled by their level.  In a pre-made module, you won't find a Lich chilling in your orc cave because it would be too hard and would wipe out the entire party.  But for storyline flavor, that is much more exciting, I feel.
Well, before this turns into a giant long rant, I'll get to the point.  My next project will be addressing some of these Roll-playing versus Role-playing issues.  I plan, for the next several articles at least, give up my advice for DM's and for players as far as how to house rule in various methods of role-playing into your game for everyone's enjoyment.  I may not be able to get my table-top group to play first edition stuff, but maybe I can get them to go with some of these house rules.
See you next time!
Posted by Sean Samonas at 11:50 AM