Man, I really need to stay on the ball here as far as posting regularly.  Today will be part 8 and tomorrow morning I'll put up part 9.  Hopefully, the DM figures that this next session on Friday will be the last one, so we shall see whether it ends in death or victory! 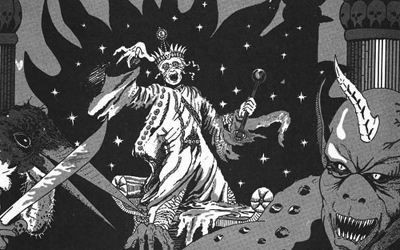 Alright, when last we left off, we had just finished found another secret hallway.  After that, most of us spellcasters were pretty low on spells, so we decided to rest for the night and continue on after resting.  One rope trick and eight hours later, we emerged ready to face what challenges lay ahead of us.

In the new hallway, we had discovered a door that led to the right and a stairway that led up.  The stairway ended in darkness, which we quickly discovered was magical darkness.  We decided to place that on hold and check out the doorway instead.  Aegon searched the doorway and found no traps, so he decided to open the doors again.  When he did a mist quickly filled the hallway and Theo, Sheeve and Gaudric and his wolf companion fell unconscious to the ground.

I grabbed Theo (who was closest to me) and began to drag him out of the mist, but the mist continued to spread and fill the hallway even more.  I managed to make my fortitude save however and carried Theo to safety.  As I was heading back to save Gaudric however...a development happened.

We heard a rumbling noise and suddenly with no warning... 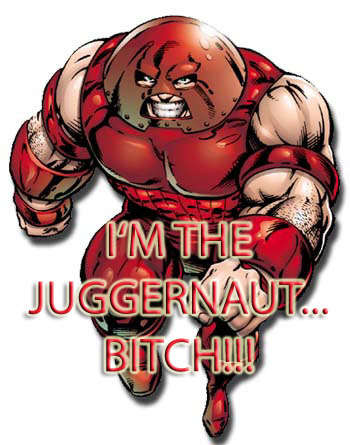 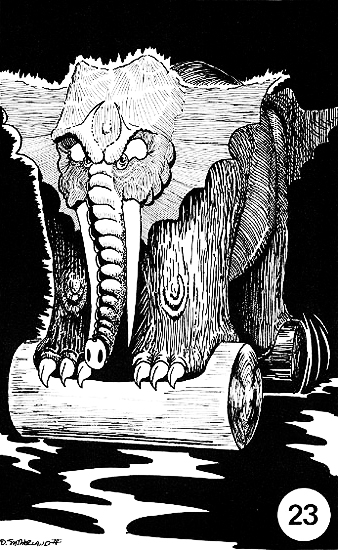 Well, I liked the Juggernaut visual better, anyway.  Though I guess this was before the actual Juggernaut monster, since it was a golem.  Well, it ended up running over Sheeve and Gaudric, and turning the wolf into a small pile of gore.  However, at about the time it was killing off it, Sainrith had cast flight on me.  I went flying in and managed to get Gaudric to safety, but the Juggernaut then crushed Sheeve to death as well.  When I dropped off Gaudric I was flying back to possibly help her, but I fell unconscious from the mist.  At about that time, Theo woke up and Sainrith cast Heroism on him.

Arkhan kept spitting acid at it, while Theo started attacking it.  About that time, Gaudric woke up and summoned an earth elemental that quickly destroyed the golem.  Once the battle was over, we healed up and moved onward.  Aegon kept trying the door, but was unable to discover any way to stop the mist from coming out once you opened it.

We decided to explore the darkness stairway, but the gem of true seeing revealed nothing but a blank wall behind it.  Sainrith let Theo borrow his necklace of adaptation and explore the mist hallway, but all he found was the Juggernauts lair with nothing in it.  Aegon then explored the floor in this hallway and discovered a secret door on the floor which led to a tunnel with a puzzle door.

We spent a lot of time trying to figure this stupid door out...and never did figure it out.  We just ended up knocking it and moving on.  But behold, we now found the columned room! 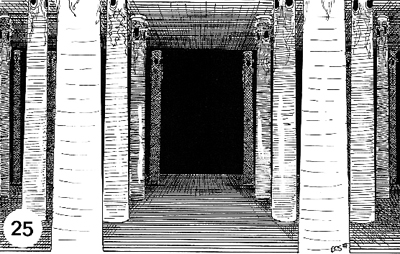 Once we all entered, the door slammed shut behind us.  We continued exploring and found a dais with a throne on it. 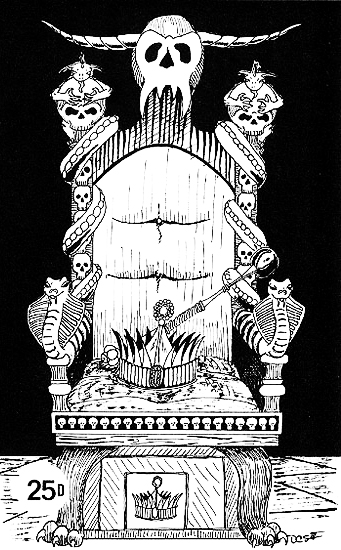 I cast detect magic and found that the crown and scepter both had overwhelming transmutation magical auras.  The pillars also were flowing with transmutation magic as well.  Aegon took the crown and scepter and decided to search the throne.  He found a small keyhole and decided to use the scepter on it.  The throne sank into the ground and he was able to discover a small tunnel leading away.

Now, he voted that we just move on down the tunnel, but we are adventurers!  We don't leave a room barely explored!  So we headed over to a faint orange glow and discovered this. 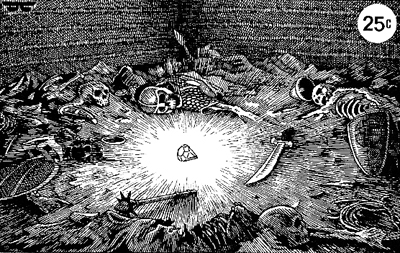 We saw that there was three crypts along the wall as well and decided to explore those.  The first one we came to we found a corpse with a gem in its eey socket and a ring.  Aegon popped the gem out, which then caused the creature to rise up from it's unholy slumber.  The gem was also destroyed in that endeavor.  I recognized it with a knowledge religion check as a Mummy Lord, and it touched Aegon with a Slay Living spell, which he failed.  Luckily, I have Revivify memorized, so I hit him with that and he was back in the fight...and he promptly ran as far to the back of the party as he could.

The Mummy Lord cast insect plague and put it down on those of us that he could.  I tried to turn it but unfortunately it was too powerful for me to turn.  Which led to the fighting.  Now, in game, we called it a night here cause people had to go.  However, I'm going to go ahead and post the end of the fight now.

Arkhan moved in with his glaive and successfully tripped the Mummy Lord.  However, on the ground, it cast Spell Resistance on itself.  I tried to cast my painful to undead spell and it didn't work since I failed the SR check.  However, I tried again on my next turn and managed to hurt it pretty bad.  At about this time, Theo moved up and smashed it with a smite evil combined with Divine Might.  We found some magic items on it and that is were I'll leave you for today.  Tomorrow, part 9!
Posted by Sean Samonas at 5:36 PM