I sit here as my Monday begins and I think of things that I find enjoyable.  Like video games...and reading...and dungeons and dragons.  I'm not hard to make happy.  This morning however...eesh.


But I also think of things I don't like.  Like spiders.  Or opening the downstairs bathroom door and seeing something dark moving toward me.  By the time I turn on the lights, all I can see is a strand of cobweb dangling in front of my horrified face.  Because it's about that time I begin stripping faster then a man in burning clothes because my mind is making the immediate assumption that there is a spider now burrowing through my layers of pajamas and sweatshirt.

I will admit, I did the entire stripping in a manly sort of calm quiet.  I didn't shriek or scream at all...very stoic of me, indeed.  But still, in my head I'm freaking out and screaming and wishing that I could die rather then have a spider on me.  So I'm standing there shirtless searching in the mirror all over myself for spiders.  I slowly turn my back to the mirror, expecting to see this: 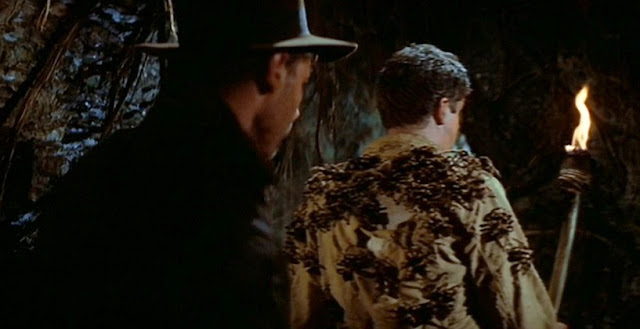 Seriously, I was terrified that it had already laid its eggs under my skin and I was about to unleash some spidery armageddon all over my apartment as the eggs all hatched at once.  The little spiderlings would burrow out of my back and then infest the apartment.  I would be nothing more then a husk...a meat sac used for depositing eggs and little else.  My girlfriend would come home to find this:

Fortunately for me (and the rest of the world), I was not infested.  Likely, all that had occurred was the cobweb flew at my face and I panicked.  As you do.

Though it did remind me of another terrifying spider story.  One time when we were at my buddies playing Dungeons and Dragons, we saw a spider crawling about the floor.  I immediately was all "Kill it!" because I am a firm believer that spiders are pure evil in material form.  If you do not kill a spider, it will simply hunt you down in the night, and impregnate you.  Thus beginning the spider armageddon.  Actually, I'm seeing a lot of parallels between spiders and xenomorphs...hmmmmmmm...

Anyway, we see this spider and I immediately leap out of harms way (ie as far away as humanely possible).  One of my other friends at the table was all, "Whatever, just a spider." takes his mechanical pencil and spears the spider.  Okay, all is well, right?  Dead spider and game can move on?

NOPE.   No, this was one of those rare times that the universe simply decided to say, "Hey Sean, you don't have enough nightmare fuel in your life."

So you may be asking, what could possibly happen?  What could be more nightmare inducing then the above or, say, clowns?  Oh, I'll tell you.

THOUSANDS OF TINY LITTLE SPIDERS CRAWLING OUT OF THE BACK OF THE DEAD SPIDER.  I am not making this up.  It was like a babushka doll from my darkest nightmares.  It was a cornucopia from hell and it still makes me shudder to remember that it ever happened.  Just...just so many tiny little spider babies, all evil and willing to kill all that is good in the world!

And the moral of the story is, "This is why I always use a spray poison to kill a spider from now on."  With those delightful stories and images, I bid you a happy Monday and good rest of the week.  Oh, and Friday my girlfriend and I are hosting a Friday the 13th Party.  We plan to watch some scary movies and have tacos.  Oh yeah, screw Comic-Con this weekend, we got it going on.  (For those curious, the movie will be at least Friday the 13th Part 2 and In the Mouth of Madness...cause I love cheesy bad 80's horror and I love Sam Neill).