Okay...so I'm lame. Took me a while, but I finally got the fighter class look finished. It mostly took this long because I was having a hard time coming up with some good archtypes to use for the fighter. Mostly it had to do with...well, let's just get into the review, shall we? 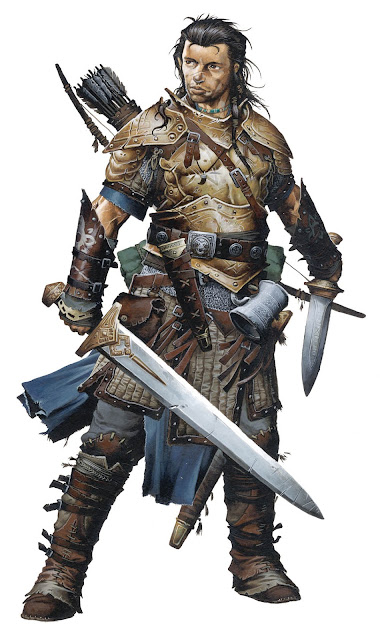 The fighter. Primarily in pathfinder and dungeons and dragons the fighter is your defensive and offensive unit. Which isn't to say that they are always going to be dealing the highest damage or have the highest hit points in the group, but typically when you make a fighter you are going for one of two builds. Either you are going to do damage or you are designed to take hits. Now, you don't have to go that way, I'm just saying that is your average fighter build.

Which is unfortunate, really, but the fighter offers so much more in terms of role-playing then...well, this guy:

As far as versatility, there are a lot of ways to go with the fighter. Time and again I see on various forums and the like that talk about classes that a fighter with a focus on ranged combat can get higher damage rolls then a ranger with a focus on ranged combat. There is also the typical “sword and board” fighter that you can use, which typically focuses on heavy armor and defense over damage. But you can also go the route of using a two handed weapon and just hitting really, really hard.


I'll talk about the various routes you can take with a fighter that can help you change things up in your game so that you aren't always playing the same guy all the time later. Fighter is one of the easiest classes to play, though since there are a lot paths to branch off with for a fighter, I recommend having a solid idea of what kind of fighter you want to play before you start. Cause nothing sucks more then getting five levels in and wanting to take your dexterous spear focused fighter and try to turn it into a shield focused fighter.

Race
Races that are good for fighter? Well, the typical big ones that don't take negatives to strength or con come to mind. That isn't to say that you should immediately ignore the smaller or weaker races like the halflings, elves and gnomes. For me, it comes down to what kind of fighter are you trying to play? Some are much more focused on dex, so the smaller races can come in handy. Others that focus on strength may be happier with a half orc or dwarf. There isn't a wrong race to choose, more like a wrong race to choose for the type of fighter you want to be.

Multi-classing
The fighter is a pretty solid stand alone class. The other classes that compliment it typically depend on what kind of fighter you want to play. A fighter-rogue is ridiculously powerful at later levels, as well as a fighter-barbarian. Typically, unless you are shooting for the prestige class, I don't recommend going with a fighter-wizard or fighter-sorcerer. I've done it a couple of times and they tend to be really awesome at lower levels, but at higher levels they start to get a little harder to play. A fighter-paladin is a good combination, as well as a fighter-bard. Again, you just need to look at what you are wanting to play and see what best helps you achieve that goal in the end.

Arch-types
Ah, the arch-types. This is what held me up the longest, dear readers. Because with a fighter, how can you really expand on it more then just “I'm a fighter...I hit things and wear armor.”? So I sat down and started writing this and eventually I started coming up with more and more fun ways to play a fighter that isn't your typically “sword and board”.

The first is the Weapon Master. I always compare this to Dell “Chase” Brandstone from the Sword of Truth series.

Now, if that isn't your style, there are more focused types. I call these the Weapon Specialists. Instead of the Master, you chose the weapon you want to use. You may have weaker back-up weapons to help out when needed, but you put your heart, soul and training into using only one weapon. This could be a sword, an axe, a spear, a bow...any weapon you choose, really (whips have a pretty awesome feat tree you can take to make them deal lethal rather then subdual damage). Because of this specialization, you tend to be a more dedicated and focused person. The Specialist is much more focused on their specific weapon type, so they tend to have one really powerful weapon that fits that type rather then multiple ones. A good example of this (and I hestitate to use this example) is Drizzt Do'urden.

Drizzt uses scimitars. Only scimitars. It is part of what makes his character distinctive and recognizable. That works the same with your fighter. If they only use a specific kind of weapon, they will soon start to be identified with that weapon, especially if you make that weapon recognizable as your own.

The last one that I'm going to talk about is the Pacifist. Yes, I know, some of you are now looking at the screen and blinking in confusion. I get that. Isn't a pacifistic fighter kind of an oxymoron, you may be asking. I simply chuckle and say one word: Ashitaka.

Now, for those of you that haven't seen Princess Mononoke...go watch it right now. I'll wait.

Now, Ashitaka is a perfect example of the pacifistic fighter. The key to the character is that you don't want to fight, but you will if you have to. Typically you will have your own goal or reason for joining with a party and you know that while you regret having to kill, you have to do it to obtain your goal. However, you can still work around that. Get weapons that deal subdual damage only. Talk to your DM to see if you can make your weapons dull so that they only deal subdual rather then lethal damage. The goal is to incapacitate your foes, not kill them. And you can extend this pacifism as much or as little as you like. You don't have to want to save everyone. You can be perfectly okay with murdering monsters and the like, but you just can't bring yourself to kill another human being. It's just one way to bring an extra dimension to your fighter that will (hopefully) generate some discussion and make his decisions memorable when it occurs at the table.

So as we can see, there are a lot of ways to customize your fighter. You don't have to only use swords, there are a lot of unique and interesting weapons in the books that you can center a fighter around that will help make him memorable. Up next will be the Monks...ugh.